You don’t and almost certainly will not ever know me, but I want to apologize to you.

I am not really egotistical enough to think that you ever actually ever noted anything that I personally ever said that was aimed in your general direction. Even so, I was one of the people who wrote to you when you began to share some of your thoughts and beliefs and political stances during these horrifically, mind-numbingly bad days of the Trump administration…because I knew a.) that your stances were credible and reality and ethically based and b.) because you had a platform and a voice which thousands, if not millions, of people might give your thoughts and words some consideration because you said them.

And look what happened to you as a result. I am so very sorry. It is not right. It is pretty fucking far from all right. And  if anything I wrote about it egged you on even a little, I am mortified.

The Sorry Saga of What Happened

For those of you who might not know, Mr. Gunn lost his job. And that happened not because of (tasteless) jokes and stupid stuff he wrote and apologized for years ago…it happened because Mr.Gunn was a vocal critic of Trump which annoyed some right wing fascist wankers.

And then, apparently Gunn personally annoyed a few kinda well known fascist wankers who seemingly  rubbed their stupid evil hands together and said figuratively “We will get you and your little dog, too!” They ran through years of Mr. Gunn’s writing, found something they could use, rallied their keyboard warriors … and seemingly overnight, Gunn was let go.

We all know that in the USA, nearly without exception, any employer can basically fire anyone for any reason (or for no reason at all.) But as somebody once sang, “Calling it your job old Hoss, sure don’t make it right….”

Most of those of us who know Gunn’s work well and who have followed his career at length were nauseated, but not by anything Gunn wrote recently or a decade ago. We were nauseated because trolls these days are being given the power to act as vigilantes, if they can put forward a narrative that can cast somebody in a negative light.

And Mr. Gunn in your case it looks pretty clear that a “light” is all it was. And I am so sorry that it happened. And so sorry for even my tiny part in it.

The thing is…. for people who have never worked in theater or film…(I did, once apon a time, before my health intervened.)….this didn’t happen just to James Gunn. In production, people really do become like family. I would be surprised  if every damn person on the GOTG  “show” from the hero cast to the lowest standby greensman is feeling a level of sadness.

As for those decision makers who did this, you should be ashamed of yourselves. At least do some soul searching.  Whatever happened to level-headed assesment? Supporting your artists? Context?

And you trolls telling yourselves that you showed those degenerate Hollywood types something, think again. You instead showed yourselves at best to be poorly informed bandwagon jumpers and in some cases to be evil jealous little toads not to be taken seriously about very much.

This time the bad guys won.

Mr. Gunn, again, my apologies. You deserved so much better. Thank you for speaking your mind, even though it backfired on you.

You really are down but not out, I am sure.

Perhaps someday we will all realize that money is not everything. Yes, as the old cliche says – “he can cry all the way to the bank.” But unless  I very much miss my guess, Gunn and the people who love him have heavy hearts these days. The reason for that is clear: he didn’t do a damn thing wrong.

In one of his performances, British Comedian Jimmy Carr said to his audience, chiding them in mock horror about his own joke… “A Child DIED in that joke, and you laugh!” The point, of course, is this:

Jokes, bad or not, are just that. No children died because of Carr’s joke – just like nobody started being a pedophile because of Gunn. If we fire everyone who makes a bad joke, 99% of the population will be unemployed.

Perhaps we all owe you an apology, Mr. Gunn… even in this screwed-up time in our country…what happened to you was not right.

PS:  for readers who are interested in communications in general – Mr. Gunn’s public statements/reaction to this whole fiasco was a complete class act and even if you don’t care about Gunn or those issues above – find and read what he said.  It certainly supported my points above. 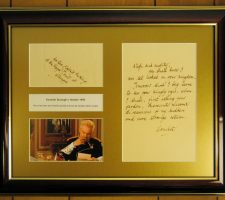 Quote of the Moment

The only true wisdom is in knowing you know nothing. ~ Socrates